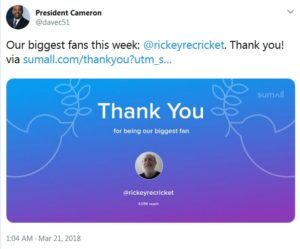 END_OF_DOCUMENT_TOKEN_TO_BE_REPLACED

That other Twenty20 slogfest has just concluded in a gross mismatch at the Stanford CC, Coolidge, Antigua. Trinidad and Tobago has won the 2008 Stanford 20/20 after thrashing Jamaica in the final Sunday night. END_OF_DOCUMENT_TOKEN_TO_BE_REPLACED

Allen Stanford’s multi-million dollar 20/20 extravaganza has become the latest entrant to the Pantheon of Cricket Vaporware – those would-be cash cows that disappear after, if they’re lucky, one outing, or if they’re unlucky – none.

The Stanford 20/20 Super Star match, set down between West Indies and South Africa for November 10 with a winner take-all purse of €3.9 million, has been cancelled. The reason will shock you, so sit down.

It clashes with an official ICC fixture. The West Indies start a Test match at Lahore less than 24 hours after the scheduled date of Allen Stanford’s brainchild.

I’ll defer to Caribbeancricket.com for analysis of the reasons and impact of the cancellation. Five million smackers for a twenty over-a-side slugfest sounds ridiculously obscene, and hopefully the lad from Texas will do something more constructive and less flashy next time… and I reckon there will be a next time.
Oh, the mention of vaporware reminds me to check out www.i2020cc.com for any updates…

The weather forecast is cloudy but fine for the Pretoria/Tshwane region for Thursday’s second round of matches in the 2005 Women’s Cricket World Cup. END_OF_DOCUMENT_TOKEN_TO_BE_REPLACED

Previews of Tuesday’s opening day action between South Africa and Ireland, New Zealand and the West Indies, and India and Sri Lanka. END_OF_DOCUMENT_TOKEN_TO_BE_REPLACED

The streak is over. Australia’s run of twenty-one successive one-day wins has been cut down by the West Indies in Trinidad this morning. Which is a good moment to spare a thought for the New Zealand cricket team. END_OF_DOCUMENT_TOKEN_TO_BE_REPLACED

Pakistan will play one Test and three one-day internationals in Sri Lanka in January following the cancellation of the West Indies’ tour.

The West Indies Women’s Cricket Federation decided last month that they would not proceed with their tour of Sri Lanka and Pakistan because of security concerns related to geopolitical instability in the south Asian region.

The Pakistanis have taken up the tour itinerary originally laid out for the West Indians. They will arrive in Sri Lanka on January 18. A four-day Test match at the Colts Ground, Colombo on January 20-23 will be followed by three ODIs – the first (January 26) at Asgiriya Stadium, Kandy, and the others (January 28 and 30) back at the Colts Ground.

In other Sri Lankan news, national team coach Guy de Alwis has resigned due to work committments. De Alwis, a wicketkeeper who had represented the Sri Lankan men in Tests and one-day internationals between 1983 and 1988, has been replaced by Nihal Kodituwakku.