In 2017 I have seen some extraordinary events on the cricket field, and by way of a personal retrospective of the year, here through some of my own smartphone * photography is a recap of some of my highlights:

David Warner’s century before lunch on the first day of the Sydney Test against Pakistan was the first time such an achievement had ever been made in Australia.

You've never seen a scoreboard like that on lunch on Day 1 of a Test match in Australia. David Warner 100 not out.

Eoin Morgan played a brilliant crafted Twenty20 innings for Sydney Thunder against Melbourne Stars at Spotless Stadium, building momentum until he blasted a straight hit six off Ben Hilfenhaus to win the game on the final ball of the 20th over. 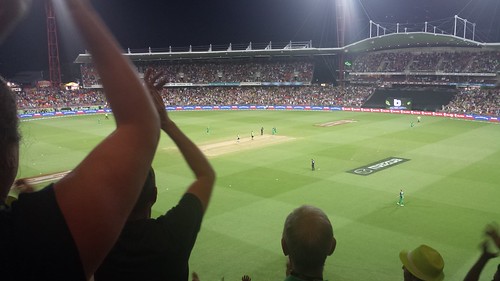 January 14: Tied after the super-over, Thunder wins on countback.

In the WBBL local derby at the SCG, Sydney Sixers and Sydney Thunder scored 138 apiece. The resulting superover finished 8-all, the Thunder awarded the win on a countback of boundaries scored in the match. Ash Gardner’s 54 for the Sixers (pictured) was one of the match highlights.

Ashleigh Gardner raises the bat after bringing uo her half century for the Sydney Sixers. She will be Australia's next indigenous international cricketer, hopefully as soon as next month. #WBBL02 #cricket

New Zealand leg-spinner Ish Sodhi, playing for the Adelaide Strikers, demolished the Sydney Thunder at Spotless Stadium, taking 6/11 from 3.3 overs to give the Strikers a 77-run victory.

A typical field setting for Ish Sodhi, who took 6/11 for the Adelaide Strikers tonight. #cricket #BBL06

On the hottest day in Sydney in years, Moises Henriques completed an epic Sheffield Shield 265 for New South Wales against Queensland.

March 7: Pat Cummins back in whites

After a long succession of setbacks, Pat Cummins played his first Sheffield Shield game in six years. Within weeks he was on the plane to India to join the Australian Test attack.

A sight we haven't seen for six years. Pat Cummins in whites, red ball in hand, charging in to bowl for NSW in Sheffield Shield. #cricket #NSWvSA

Having taken a hat-trick in the first innings against Western Australia, Mitchell Starc did it again at the Hurstville Oval the next day to give New South Wales a stunning Sheffield Shield victory. I captured the moment Steve Smith took the catch to give Starc his second hat trick and NSW the win.

Australia played England under lights over four days at North Sydney Oval in front of an enthusiastic crowd. (I missed Ellyse Perry’s double century on the third day to be present at my first ever game of the Rugby League World Cup).

Glenn Maxwell leaves the field after a brilliant innings of 278 for Victoria. #cricket #NSWvVic

Of about forty Twenty20 matches I have attended, the WBBL03 season opener between Sydney Thunder and Melbourne Renegades was possibly the best of the lot. Renegades chased a then-record 201 for victory. Stafanie Taylor gave up just three runs in the final over to give Thunder an eleven-run victory. The photo is of the Thunder celebrations after Harmanpreet Kaur caught Amy Satterthwaite on the final ball of the game.

The annual cycle begins again and the Sydney Thunder beat the Sydney Sixers on the final ball of the game.