I attended my first Twenty20 game yesterday. While I won’t be hanging out for the second, there are plenty who will. And that’s a good thing.

To get the bald facts out of the way: it was game four of the inaugural “KFC 20/20 Big Bash”, New South Wales versus Queensland at the North Sydney Oval. Queensland won the toss and batted first. They were all out for 167 in 17.3 overs. New South Wales replied with 5 for 168 in 18 overs to win by five wickets with two overs to spare.

The NSO was packed out for yesterday’s game, with an official attendance of 10470. The only spare spots I could see were in the Members Stand. The pre-match entertainment was amiably daggy with an endless barrage of 80s hits blasting over the PA. “Ooh that’s an oldie from Dragon” said the forty-something chap a couple of rows in front of me as “Howzat” by Sherbet was playing. The amiably daggy 2WS breakfast person Amanda Keller was master of ceremonies. There was the obligatory sky-diver who brought the match ball and the toss coin into the ground. There was face-painting for the kiddies (better than the norm, I must say). And a very ordinary six-hitting competition at half time.

And there were the players’ names on their shirts. No, not their names, their nicknames. The imagination level was about what you’d expect in most cases – take a bow Simmo, Rimmo, Nicho, Burkey, Birdy, Tatey, and of course, Kasper. My favourite was Queensland wicketkeeper Hannibal… not sure whether he likes riding elephants or it has something to do with his eating habits at lunchtime.

Unfortunately the ground announcers failed to inform us of the team changes from the printed program, even Blues captain Nicho wasn’t in the original lineup. (He replaced BJ, called up for the Australian Twenty20 team tonight.) I had no idea till I came home that Sydney University all-rounder Ian Moran had even played in the game, let alone scored 12 runs and taken three wickets. So that’s who Scotty number 28 was…

The game started with a crash bang wallop, Flip sending Eagle soaring over the boundary three times. My thoughts at the time were something along the lines of “Call me old fashioned, but I like a game of cricket where the batsmen have to run up and down the pitch and the fieldsmen have something to do.”

It got better, as the NSW bowlers started how to bowl a length, the fielders started blocking the runs, and the Queenslanders started messing up their shots. In the end, they suffered the ultimate indignity of being bowled all out in a Twenty20 game. And it took just an hour and five minutes. And, yes, it was the slower bowlers, Scotty and Obi, who triggered the collapse.

It was easy going for the Blues in reply, with opener Burkey playing an absolutely sluggish 30 from 24 balls in the sheet anchor role. Sooner or later these blokes will have to forget all semblance of technique if they want to play Twenty20 properly. DT smashed NSW to victory with the only half-century of the day, 57 not out from 38 balls. (Somehow I was expecting him to retire at 50, as per the Super 8s).

The spectators had much fun, with prizes on offer for every six caught by a spectator. Normally $100 for a caught six, the prize was $1000 is they were made off the designated power hitters, Flip for the Bulls and DT for the Blues. Of the fifteen sixes hit during the two-and-a-bit hours of play, I can only recall four or five being caught cleanly. Presumably the security guard who snared DT’s last six of the match was ineligible to claim his grand.

I was hoping to see Australian Under-19 captain Moey in action in this game, but despite being in the NSW starting eleven, he neither batted nor bowled.

So there it was. A match that began at 4pm was all over at 6.20. It was all action, all noise, but was over much too quick. Towards the end of the game I was asking myself “So who’s playing in the second game of the double-header?” Everyone had a good time, but I reckon most of them would have come along had it been an all-day 50-over affair.

In summary, the game was a load of claptrap. Enjoyable claptrap. But you knew that. 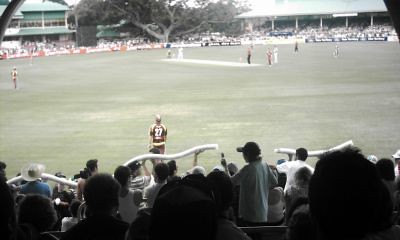