The Hundred is a camel designed by a Horse Committee. A Horse Committee specially convened despite all the perfectly fine thoroughbreds grazing the paddock.

A contrivance, built on the run by an organisation that got it right sixteen years ago, with what we now call the T20 Blast, but decided they wanted more. And a contrivance that had to be different for the necessity of it being different if it was going to exist.

A development process that looks from the outside like it was written for a Project Management How Not-To Manual. A program in which participation by female cricketers seems to have been an afterthought which still hasn’t been fully fleshed out.

There are many reasons why I believe The Hundred should never have happened. But it is happening. The teams are created, the coaching staff hired, many of the players drafted. The sponsors – all brand names of one “snack food” manufacturer – have been announced, as have the team kits which look deliberately like said snack food wrappers.

The rules of The Hundred may or may not be so simple that “mums and kids” (shorthand, presumably, for “Grocery Shopper With Child”) can understand them. I am sceptical that they will be. Every aspect of The Hundred can almost be visualised by the scribble on the whiteboard upon which they surely were invented.

I am sceptical about The Hundred’s entire Reason For Being. But now it’s time to move forward. The ECB has staked so heavily on The Hundred that it is entering the Too Big To Fail category. But even if this brave new Cricket-As-Game-Show is a success, and by whichever metric is convenient on the day it surely will be, will the rest of English cricket flourish along with it?

What of the eighteen-team major county system? What of equal playing opportunity for women at county level and above? What of the T20 Blast? What of England’s competitiveness in fifty and twenty-over World Cups? What of the kids?

I look forward in the coming years to new and exciting creations from the ECB’s Horse Committee.

Australia’s Steve Smith is the winner of the Midwinter-Midwinter for 2019.

Smith accumulated the most points during the 2019 Ashes for the Best-on-Ground awarded on each day of each of the five Tests as announced on the @rickeyrecricket Twitter account.

Smith, playing his first Test series since his twelve-month suspension for a Cricket Australia Code of Conduct breach, scored 774 runs in four Tests at an average of 110.57, with a top score of 211 among his three centuries. In only one of his seven innings did he fail to reach 80.

The first player in Test history to be substituted because of concussion, Smith missed one-and-a-half Test matches yet was still rated Best On Ground on five separate days during the series.

With the best three players ranked each day on 3-2-1 basis, Smith amassed an exceptional 19 points for the series. This was Smith’s second victory in the Midwinter-Midwinter, having come first in the 2017-18 Ashes with a score of 17.

There was a three-way tie for runner-up between Pat Cummins, Josh Hazlewood and Jofra Archer, who each scored 11 points.

The full spreadsheet of the daily scores can be seen here.

The Midwinter-Midwinter is the @rickeyrecricket BoG (Best on Ground) award given for the most valuable player of each Ashes Test series.

There is no physical award as such, and the Midwinter-Midwinter is not endorsed by any cricket board, advertising agency or anti-doping authority. But most importantly, it’s not the Compton-Miller Medal.

Points are awarded for the best three players on each day of a Test match in the series, on a 3-2-1 basis.

The Midwinter-Midwinter is named for Billy Midwinter (1851-1890), the only person to have played Test cricket for both Australia and England in Test matches against each other.

Further explanation of the Midwinter-Midwinter, its background, the scoring system and past winners can be seen here.

On the occasion of the 111th anniversary of Donald George Bradman’s birthday – August 27 2019 – I searched up a number of unusual non-cricketing items about The Don from contemporary newspapers, with thanks to the National Library of Australia’s glorious Trove database:

Happy eleventy-first birthday to Sir Donald Bradman. Being born on August 27 made him a Virgo, as the astrology page of the Australian Women’s Weekly of 14/9/38 reminds us: pic.twitter.com/ajPwN4eVSp

“Kindly and clever Virgoans are always in danger of developing into exacting tyrants. The remedy is in thejr own hands.”
June Marsden, President of the Astrological Research Society with advice for the future head of the Australian Cricket Board of Control https://t.co/e4QRGywn3M

On the 111th anniversary of the birth of Donald George Bradman here is the sheet music for his musical composition “Every Day Is A Rainbow Day For Me”… https://t.co/FYA2CQKJ1X

and here is “Every Day Is A Rainbow Day For Me” sung by the Don’s granddaughter Greta: https://t.co/L2KfOkMbin

“The decisive factor was the amazing footwork of Bradman, who has only been playing squash three years. He has been playing a fair amount of golf this season.” https://t.co/hKRcn7Csuc

A thread I posted to Twitter to commemorate Dennis Lillee’s 70th birthday on July 18 2019:

In my opinion the most popular figure in Australian cricket since Bradman retired. Happy 70th birthday to Dennis Lillee. Here is the day he took 8/29 against the Rest of the World in 1971: https://t.co/CW3z4Ml3zn

One of the greatest exhibitions of hostile fast bowling, in one of the best one-day games of all time. Western Australia’s Dennis Lillee to Queensland’s Vivian Richards: https://t.co/TV5kPOXcCx

More of Dennis Lillee following this word from the NSW Building Society https://t.co/FRYb6yiC7H

“When you want carpet, who do you call?” https://t.co/Sl3ECxfgnv

“If Steel Blue had made cricket boots instead of work boots, I might have been doing this a bit longer” https://t.co/7BVuqbh36e

A thread that I posted to Twitter to commemorate Sunil Gavaskar’s 70th birthday on July 10 2019: END_OF_DOCUMENT_TOKEN_TO_BE_REPLACED

To view this content, you must be a member of Rick's Patreon at $1 or more

As part of a debate that developed downstream from a team listing put together by Brad Hodge and tweeted by @7cricket a few days ago (see below), I have assembled a hypothetical Sydney Thunder squad of players from the pre-T20 era.

END_OF_DOCUMENT_TOKEN_TO_BE_REPLACED 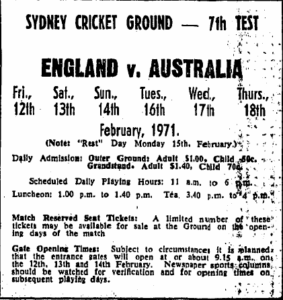 END_OF_DOCUMENT_TOKEN_TO_BE_REPLACED

A moment from Twitter AU in which no less than five of my tweets get a quote: END_OF_DOCUMENT_TOKEN_TO_BE_REPLACED